Here's a special bull that was taken earlier this year by Brandon Liester with the help of Gino Wulkotte. Sounds like it was without a doubt a dream hunt!!!

The rut was very slow to start this year but we had a great time and made the most of it. I arrived in my unit 2 days early and hunted 6 of the 7 days. Every day we had at least 3 groups of glassers out looking for "the bull". Lots and lots of good bulls, but no "WOW" bulls. On my drive home, I did an honest inventory of the bulls I personally saw and came up with 71 bulls in 7 days. I had every opportunity to shoot a solid 365" + plus bull opening morning but decided to keep hunting, and I am glad I did.
I had tons of help and we covered a lot of country. I had 3 great back-up bulls located in a remote area where there had been no hunting pressure. I could have shot several 340-350" type bulls but kept passing in hopes of finding a bigger bull. The rut was getting stronger by the day and new, bigger bulls kept showing up daily.
On day 6, we had a herd of elk in the timber below us at about 400 yards. Gino called 2 of the bulls up to within 30 yards, and a few of the bulls worked up a canyon away from us. That left 4 distinct bugles in the trees with the cows. We decided to get aggressive and snuck in the trees and into the middle of the elk. We spent over 2 hrs trying to locate each of the 4 bulls in the thick junipers and pines. We had elk within 50 yards of us the entire time. We had eliminated 3 of the 4 bulls but could never get a look at the herd bull. Gino nicknamed him "The Joker" because of his distinct laugh-like bugle. The cows had finally had enough of our cow-calling and left the bedding area. The Joker bull initially went with them and then suddenly stopped bugling. We were bummed to have not gotten a better look at him but headed back to the truck. We walked a few hundred yards back the direction we came from when I caught motion to my right moving through the timber. It was the Joker bull trying to sneak out the back door. As he crossed a clearing at less than 60 yards and Gino muttering, "No." "No." " No."... and then… "BUST him!" I busted him and he crashed 50 yards away. It happened very fast.
As we approached the bull he just kept getting bigger. He is a 7 x 8 with a non typical right side. He has 21"+ 4ths, 41.5" of width, and 52" main beams. His right side has a split 4th and a kicker off his main. I am thrilled with the bull and had a blast hunting with new and old friends. 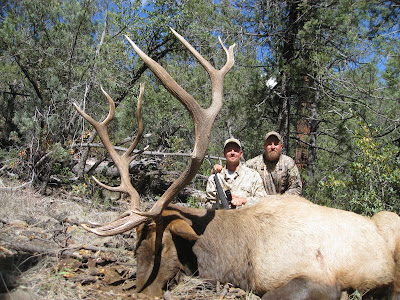 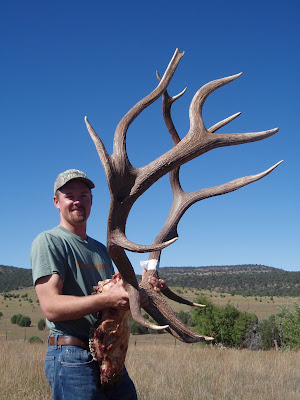