I was fortunate to hunt with a friend this year on the 2010 early archery hunt and I was super excited for it because I know what a character Bill Kelly is! Bill has hunted with us before several years ago and took a great late season bull on a tough hunt. That hunt was filled with TONS of laughs and good times despite the tough conditions but just being around Bill we always had fun! Here's the bull he took on that first hunt.... 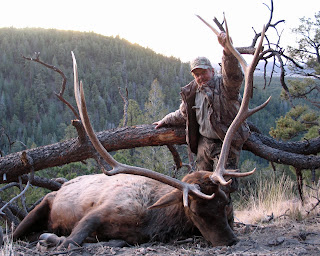 Now that Bill drew a coveted archery bull tag he called me and the hunt was planned. We had been scouting extensively in his unit all summer long and although there were very few "giant" bulls this year, there were definitely plenty of great bulls to hunt! We planned on a 7 day hunt but figured we'd be done well before that because of all the great bulls and the good rut starting early! Little did we know the hunt would last for 12 days! We were on huge bulls daily, a couple were 370-380" and one bull in particular, named "King Henry" was a huge 6x6 bull and he teased us every day. We would chase King Henry daily but the country was flat and thick and he had his harem with no desire to add to it. To know we were hunting such an amazing animal was awesome and kept us going but in the end we realized he was simply untouchable and we had spent too much time on him. If it weren't for the fact we were chasing our dream bull the whole time Bill could've taken several other great bulls but he stayed vigilant and held out. Here's King Henry.. 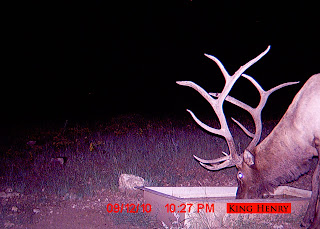 By now we were already into the 11th day and Bill decided to call it quits. He was very happy with the hunt and the bulls we passed up and called in, some to under 10 yards! I agreed it was an amazing hunt regardless of not killing but I haven't had an archery hunter go home empty handed so I told him to get back up before the hunt ends. Bill said he'd try and then headed home. Later that night he called and said he'd be back up the next day! Wore out but excited the game was still on I decided to hunt a different area and call it quits on King Henry. The new area had good bulls but our expectations for these last 2 days would be only for the first 6 point to give us a shot! The first day out was overcast with light sprinkles. The bulls were screaming and Bill and I were set up in some open country callin in bulls! The first bull was a raghorn and he veered around us. The second bull was pushed towards us by a much larger bull that we caught a quick glimpse of. This larger bull had some seriously long tines but was obviously only interested in his cows. The bull he pushed towards us was good enough and Bill and I both agreed, a bird in the hand is better so we got ready. The bull stopped behind brush at 60 yards as Bill drew and held on an opening at 50 yards and waited. In no time the bull came into veiw and stopped perfectly just as Bills arrow arched towards the bull! THWACK! The shot was perfect, the bull ran 20 yards and fell! I ran around the tree to get a visual just in time to see the bull get back up and run falling again shortly after! 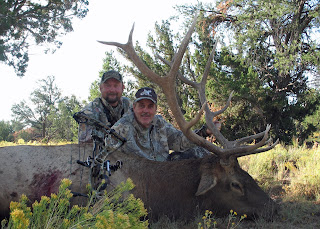 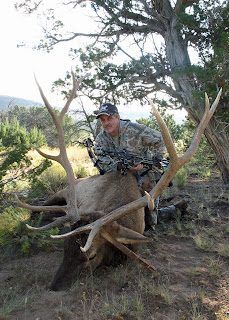 Bill and I both were very excited and happy to still wrap a tag on a good bull after such a long hunt. We had opportunities at much larger bulls, seen a couple huge bulls, had tons of great experiences and still put down a good bull with a phenomenal shot in the last inning of the game! Thanks Bill for a great experience and congrats again! Jimmy>
Posted by JIM> at 2:22 PM