Here is a story that I just had to share with everyone. This story is about a close friend of mine's son Jakob and his first archery kill! I've known Jakob his whole life and remember the day he came into this world his father Bret and I had talked about how excited we were for the day he would take his first big game animal. That day has already come and gone and several javalina and deer have fallen to Jakob's well placed shots, but this is his first archery animal and as you'll read, it took alot of skill and talent to get it done! Be watching for many more stories and photos of Jakob, he's already well on his way to becoming a very successful hunter!

I bought Jakob & I these tags over the counter for unit 18b. Jakob is 2 for 2 with a rifle so we decided to try it with a bow this time. I decided not to carry my bow until he got one.

Friday & Saturday we hunted hard but only came up with lots of hunters,some deer, & a few distant pigs that we couldn't re-locate.

Sunday morning we hiked to our favorite glassing spot. After about an hour we glassed up 3 pigs!!! They were about 3/4 of a mile away & the stalk was on!!! After about 30 minutes we were on the ridge we last saw them. We would stop & glass as we went but couldn't find them until Jakob says "is that a pig by that cactus?".... sure enough! 65 yards away stood a lone pig... "good job buddy let's go!" We started to close the distance on a tree that should put us 20 yards form them. We were almost to the tree when I tell Jakob to "knock an arrow,put your release on, & get ready". A few more steps & we spot a pig walking out to the right from behind that tree at about 15 yards! He's behind a bush looking in our direction & woofing....I tell Jakob "when he steps out take him behind the shoulder". The pig starts walking out to the right, Jakob comes to full draw & as the pig is walking....wack! he hits him a little far back but he's hit!...."re-load"( lol! ) 2nd shot closer to 20 yards now as the pig steps through a small opening in the brush & stands...wack!...mid body but low! We Track him down into a wash & under some boulders where he laid with his back to us. 3rd shot 10 yards..."right between the shoulders where the collar is o.k.?"....wack! " good shot buddy! let's just wait him out". After about 10 minutes we decide to try & get him to stand, so Jakob could get a broadside shot & finish him....this is one tough pig! I took a stick & got him to stand/crouch in the back of the cave...now he's quartering to us. 4th shot (last arrow) 5 yards...."hold tight to the shoulder right behind the collar"...wack!... "that's the one!...lung shot!" The pig walks out of the rocks & dies in the wash! WOOHOOOOOO!!!!Jakob's 1st archery pig is down!!!!!

Jakob's pig was a big ol' boar that of course....he wants lifesized. He gets to sew up all the holes though....lol.

He was using his Browning Micro Adrenelin,100 grain 3 blade Muzzy's.

I wasn't sure what to expect for his 1st bow hunt...but Jakob held it together & got it done once again. Proud of ya' buddy!

Jakob's famous quote that day...."I love the smell of pig in the morning" hahaha! me too buddy.... 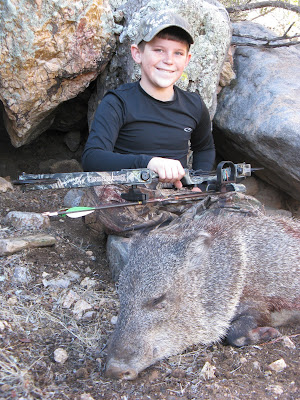 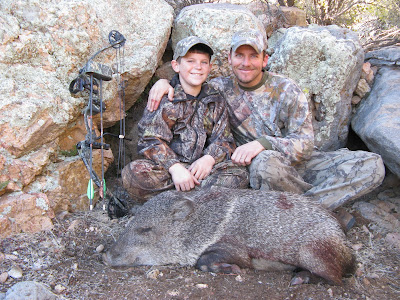