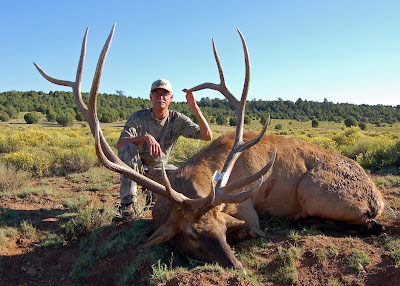 I'm not going in order here but I'm excited to share this story with you all!

We had 2 hunters, Davey and Gene, in Unit 10 this year on the early rifle hunt. Bryan would be the guide and my brother and myself would be helping throughout the hunt. Bryan did a great job and scouted for weeks before the opener and had some giant bulls picked out! Our hunters, Davey and Gene and Gene's brother Robert, are great guys and the atmosphere in camp was awesome and I only wish I could've been there during the whole hunt! Camps like that are why I love doing what I do and killing big bulls is only icing on the cake on those ones!

Matt and Bryan took both guys out seperately, Matt with Davey and Bryan with Gene. Bryan had some big bulls hitting a tank so he took Gene to sit it. I'm very surprised anything came in because I know how much I laugh being around Gene and I know Bryan had to be rolling in the dirt trying not to laugh out loud in the blind! Gene is one of those characters that even when he's not trying he gets ya laughing! Bryan would keep getting out of the blind to splash in the water in hopes a bull could hear it and come to investigate, but I know he was just needing a break from Gene! LOL! Eventually a big ol' bull came in to check out the noise and Gene was ready for him! Gene laid the smack down on him and tagged the biggest bull of his lifetime! Matt and Davey were close enough to hear the shot and they all were excited to see Gene killed a great bull! 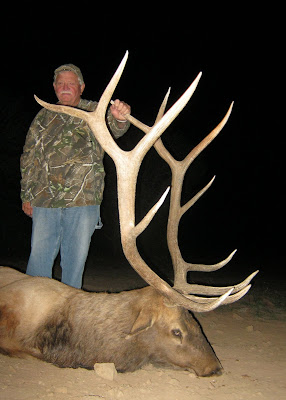 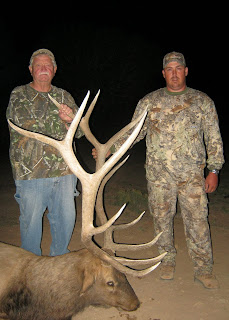 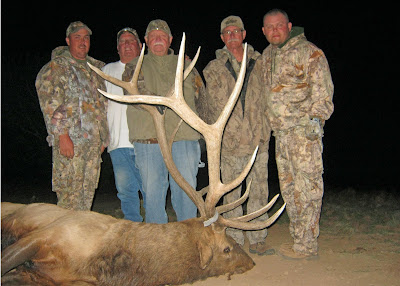 Now it's Davey's turn! Matt and Bryan tag teamed and even with the help of Gene's brother Robert they relocated a bull that Bryan had some history with from the earlier archery season. Bryan had his archery hunter on this bull on opening day and his hunter shot him with what they thought at the time was a high lung shot. Unfortunately another guide ran in on the bull even though they knew Bryan's hunter already shot him! A whole mess of unfortunate events followed and everyone thought the bull ran off and died....but that wasn't the case! The arrow had actually passed through the back straps just above the rib cage and the bull was healthy and rutting his harem of cows 2 weeks later!
Matt, Bryan and Davey hunted this bull hard for several days with some very close calls but no shots fired. Bryan knew this bull intimately and everytime he moved Bryan knew exactly where to relocate him! Matt had to go back to work so I headed over to take his place. On my first evening there I watched as Bryan and Davey moved in on the bull but unfortunately bumped him again. Bryan told me exactly where to find the bull in the morning and the plan was set!
The next morning Bryan headed to a high point as Davey and I moved into the country where Bryan said the bull would be. Sure enough just after light we hear a bugle! There are no other bulls in this area so we knew it was him! I grabbed Davey and moved quick into position just as his cows came across a clearing at 200 yards! I threw the tripod down, Davey dropped his gun into place, I ranged the opening, here comes tines....It's him, 210 yards.....BOOOM! WHOP!!!! He's hit, He's down!!!!
I called Bryan and assured him that 5 weeks worth of watching him and all the drama he's endured with this bull, it was finally over! Davey and I walked up to the beast first and it never gets old for me, something about walking up to a giant bull and seeing the emotions on the hunters face is why I do what I do! Bryan came up shortly after and it was dead quiet. Davey and I didn't say anything and I could see through Bryan's watery eyes as he picked up the rack what he was feeling. He spent a crazy amount of time trying to kill this bull and had gone through some crazy bullcrap with other hunters in the process. This was his second hunter to shoot this bull and getting to put his hands on the antlers was a long time coming!
Even though I loved every second of the short time I spent with Davey and Bryan, it should have been my brother Matt standing there with Davey when he killed this bull. Matt had been there for everything but the kill and I felt bad just showing up for the finale...but I'll get over it, I had a blast!!! LOL!! Here's the beast named "Sidekick"! Average 61" on beams, over 44" wide, 390" straight 6! 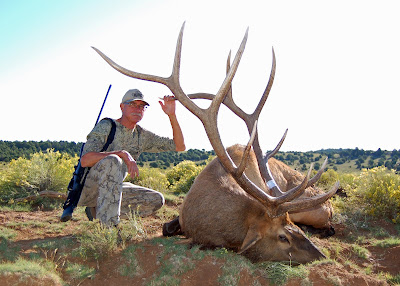 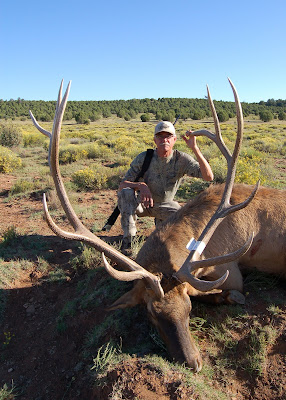 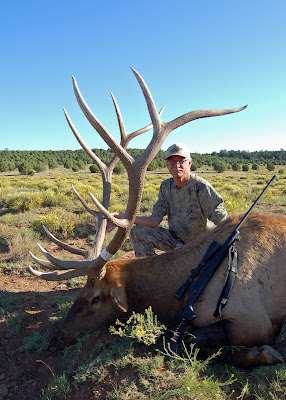 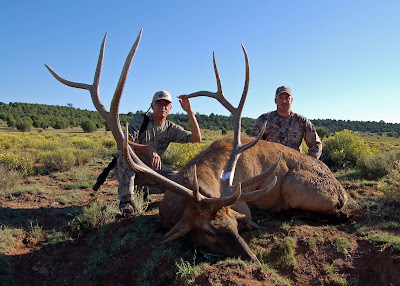 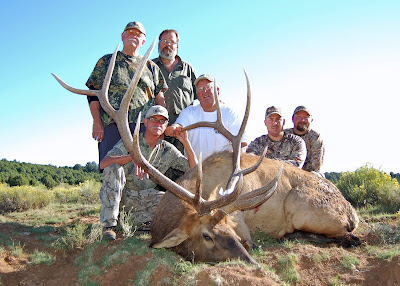 Again, it was a great hunt, and I know it was an awesome camp with great folks! To kill two great bulls in the end was just icing on the cake and I'm glad I got to at least see one of em' hit the dirt! Bryan and Matt did an incredible job and their hard work was obvious to all that shared in the hunt. Thanks to Robert and Glen for all your help in camp and Dad and Gary for their help as well early on! Congrats to Davey and Gene on your great bulls! Mullins.
.
Posted by JIM> at 12:07 PM