.
During the archery elk hunts this year I was fortunate to experience an awesome hunt with good friends Tony and Craig! Tony and his family have hunted Coues with me for the last few years and we've had some great times together. I knew this hunt would be no different. Tony had drawn the archery elk tag and despite the slow rut and bad weather he kept his spirits up the whole time and I knew it was just a matter of time until he got the shot he wanted. The time frame between the first and last shot was a roller coaster full of emotions with it's highs and lows but in the end we were rewarded for all our determination and persistence! Thanks Tony for letting me experience it with ya and congrats on a great first bull and great job stickin' with it!

"We'll, we spent 10 days hunting in solid rain with almost no rut activity and finaly got a shot at a nice Bull and I hit a little bit back, not the best shot. After givin him plenty of time we started tracking we'll we followed blood until it stoped then we were able to track him in the soft ground. At 12:30 and two miles later we GPS the last track and went back to camp. After a night of no sleep we picked his tracks back up and followed them for another two and a half miles were we spooked him off his bed and he blew out like nothing was wrong I just knew we were not gona recover this bull. So we stayed put and gave him some more time after what seemed like forever we were back on his tracks. He had only gone 200yards and beded this time we were ready we closed the distance to 45yrds man I was shacking so bad but I took a deep breath and sent the arrow and place a great shot hitting both lungs. He blew out again and went 60 yards where he crashed and we recoverd him. What an awsome hunt and a great track job by Craig and Jim. It pays to be persistant!"
. 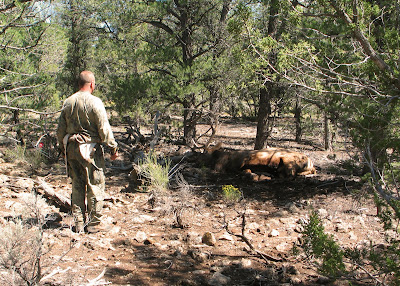 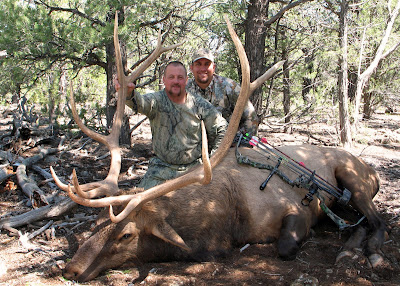 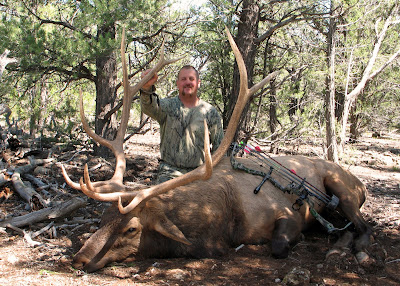